The Secure SHell (ssh) is normally used for remote login to another system. However it is a flexible and powerful tool that can be used for many other interesting things as well. One of them is port forwarding (also known as ssh tunneling) between the client and the server machine. Althought there are lots of tutorials out there, I always find it a bit confusing how to use it properly. So, I am writting yet another tutorial about ssh tunneling, based on use cases and examples, hoping to make its usage clear to myself and to the others.

Suppose that a certain website (for example twitter.com, or in our example remote.com) is blocked by a firewall, which does not allow us to open it in browser. Let's also say that we have ssh access to a server (that I will call proxy.com) somewhere on the internet, on the other side of the firewall. This means that we can login to this server with a command like ssh user@proxy.com (and with the user's password). In such a situation we can bypass the firewall with a command like this:

In this case we are forwarding the port 8000 on our local machine to the port 80 on the server remote.com, through the server proxy.com. This means that if we open 127.0.0.1:8000 in browser, this request will be sent to remote.com:80 through proxy.com and we will get the reply in the browser.

As far as remote.com is concerned, the request seems to come from proxy.com. The firewall (which blocks the website remote.com) sees only ssh traffic between our machine and proxy.com. It has no clue about the HTTP traffic because it is encapsulated inside the SSH traffic, and the SSH communication is encrypted.

You can see why it is called a tunnel: because the traffic is hidden inside the SSH traffic, and because it can be used to bypass the network gatekeepers and checkpoints.

Note: The situation when a webside is blocked can be solved by other means as well, for example using a Tor browser. However it serves as a good example for explaining ssh tunneling and how it works.

2 Connect to a database behind a firewall

Suppose that we have a webserver and a database server on the remote server example.com. Usually a database is configured to be accessed only from the localhost, but we would like to access it remotely from our local machine (in order to use a GUI management tool, for example). We can solve this situation by making a SSH port forwarding with a command like this:

Figure 2: Connect to a DB behind a firewall

Now we can use the pot 9000 on our local machine to connect to the database server. Behind the scene it will be actually forwarded to the port 3306 on the server example.com. As an added benefit, the communication be encrypted and secure, even if the database server itself does not support secure communication, because all the traffic is encapsulated inside the SSH protocol.

Suppose that we are developing a Ruby-on-Rails application in our local machine and we want to show it to someone else on the internet. Normally this is not possible because our machine does not have a public IP that can be accessed remotely. However we can fix this if we have ssh access to a server with public IP, somewhere on the cloud. We can use a ssh command like this:

Note: In order for the reverse port forwarding to work, it has to be enabled on the sshd configuration of example.com. It is not enabled by default because it may become a security problem. To enable it we have to add the line GatewayPorts yes on /etc/ssh/sshd_config, and then we have to restart the sshd service: service sshd restart.

The following diagram shows the connection between two computers with private IPs, with the help of a proxy server that has a public IP: 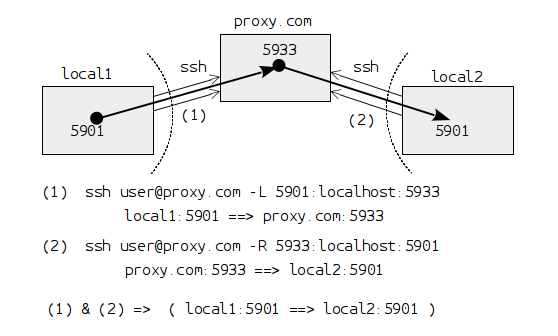 Since none of the local computers has a public IP (and usually each of them is behind a firewall) they cannot contact each-other directly. However, with the help of a proxy server which is accessible from both of them, they can establish a port forwarding between them and communicate securely.

The first local computer can forward its local port 5901 to the port 5933 on proxy.com, like this:

Then the second local computer can forward the port 5933 on proxy.com to its local port 5901, like this:

By the way, the port 5901 is usually use by VNC, and this connection enables a vnc client on the first machine to access a vnc server on the second machine. It has the added benefit of a secure connection, because the VNC protocol is a bit old and does not support encryption, but the traffic is done inside a ssh tunnel, and this makes it secure.

Any other protocol can be tunneled, instead of the VNC protocol. It is perfectly possible to tunnel the SSH protocol as well, inside a ssh tunnel. For example, if we run these commands:

Then by running the command ssh abc@127.0.0.1 on the first machine, we will be able to access the account abc on the second machine. This assumes that we don't have a sshd server running on port 22 on the first machine, otherwise we would have a port conflict. But in such a case we could forward the port 2201 (for example) to port 22 and then access it like this: ssh -p 2201 abc@127.0.0.1.

5 Accessing a local computer on a remote LAN

It is also possible to use the second machine as a gateway for accessing another local computer on its LAN, as shown in this diagram: 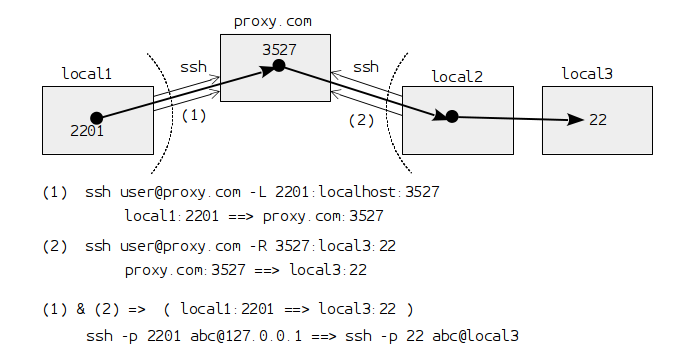 Figure 5: Accessing a local computer on a remote LAN.

On the second command we can give the name or the IP of the internal machine that we want to expose. Then we can connect to it from the first machine with a command like this: ssh -p 2201 abc@127.0.0.1.

Whenever we create a tunnel, we also get a ssh shell on the proxy server. Usually this is not needed because all that we want is to forward a port and to create a tunnel. To avoid this, we can rush the ssh command with the flags -nNT wich will tell ssh to not allocate a tty. The command will look like this:

Besides this, it is more convenient and secure to establish the ssh connection with public-private keys, instead of using passwords.