Note: This tutorial can be tried interactively on: https://katacoda.com/dashohoxha/courses/misc/central-git-repo-with-ssh

To synchronize the work on a programming project we usually use GitHub, GitLab, etc. It is also possible to install and use one of the GitHub-like systems in your own server, like:

However if you don't need a web interface, issue management, pull requests, and other fancy features, you can easily create a central Git repository on your own server and access it through ssh. This tutorial shows how to do it. 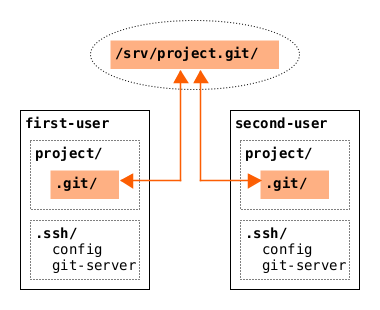 In this step we are going to setup the server. In the following steps we will do the setup for the first user and the second user.

For the sake of example, the first user is named first-user. He is going to use the account user1 on the server.

The following steps should be done on the computer of the first user.

With this setup we can collaborate and share code by using the central Git repo as a coordinator.